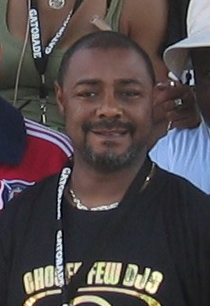 A true DJ’s DJ, Andre Hatchett may be one of the juice bar era’s most beloved artists, yet he is almost unknown outside Chicago. As he tells the story, the younger Hatchett brother had already been making pause mixes, and pause remixes, on cassette tapes for some time when older brother Tony gave him a chance to get on the decks at his aunt’s birthday party. That night he realized that he had an innate talent for mixing and an irrepressible love for the craft of DJing. Hatchett moved on from spinning family functions to carrying equipment for his older brother and The Chosen Few, all the while developing his taste and appreciation for a diverse array of danceable sounds partying at the original Warehouse at 206 South Jefferson. He went on to DJ events for David Risqué’s Gucci Productions and Craig Loftis’ Vertigo, joining The Chosen Few Disco Corp. in the early 1980s. Even though Frankie Knuckles never formally mentored him, the Godfather had a formative influence on Hatchett’s sonic approach and work ethos. Hatchett emphasizes that his craft was built on listening for both repertoire and programming, and that Knuckles was an inspiration on both fronts. He counts as his protégés DJs Celeste Alexander and Keith Fobbs, and was a co-resident DJ at The Pleasuredome with Pharris Thomas.

Plugger from Vertigo promotion at Sauer's

The Chosen Few Outgrow The Garden of The Phoenix

When Andre Hatchett showed up at 5:00 pm, a few hours into The Chosen Few Picnic at The Midway, it was so crowded he knew the event had already outgrown its new home.