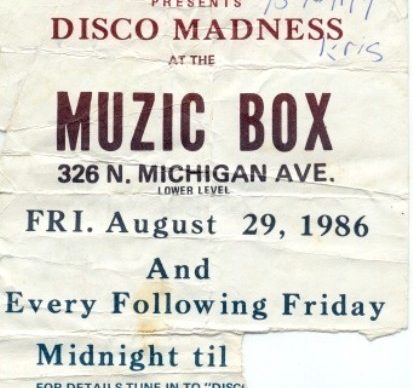 (The) Music Box (The Box, The Muzik Box)

Influential socio-sonic space developed by Robert Williams following his split with Frankie Knuckles. Catered to a straighter, though by no means narrow-minded, tribe of dancers and was a font of inspiration for aspiring DJs and dance music producers alike. First developed with a fraternity brother of Williams’ in New Mexico, the Music Box concept opened in Chicago inside a temporary gallery space on Michigan Avenue just a few doors down from popular teen juice bar The Playground. Soon thereafter the owners of 206 South Jefferson offered Williams a lease at a 1632 South Indiana loft. The space would become the party’s most consistent home. Williams held the party at 326 N. Michigan later in its life-cycle.

Do you have anything you'd like to submit? A story? Photos? Or maybe even an audio recording?