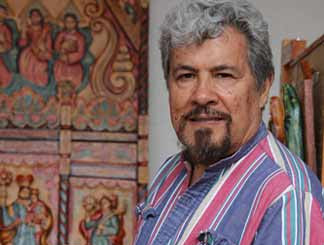 Carlos Santistevan remains in his Five Points home as a Denver native. He is one of the city’s few santeros. He was a founder and leader in the local Chicano Arts Movement and his work, most notably woodcarving, can be seen anywhere from the Smithsonian American Art Museum to the Vatican.

This image shows the well-known artist Carlos Santistevan observing Chicano art at the Crusade for Justice Center. He was an activist in the Chicano Movement and a member of the Crusade, so this was likely not his first time at this building, and surely not his last. Santistevan would establish El Grito de Aztlan art gallery at this location. There is even some evidence to believe the featured image was taken while setting up for the gallery opening.   -written by Molly Kimbley

A product of his activism, El Grito de Aztlan was founded in 1968 by Denver's Carlos Santistevan. The gallery is a reflection of the Chicano Movement and a result of Santistevan's own self-determination. El Grito was not something he heard of until his involvement with the Crusade for Justice, but would clearly prove to be significant to him. For Santistevan, its meaning came to be a proclamation of oneself, from where we came from to who we are.   -written by Molly Kimbley