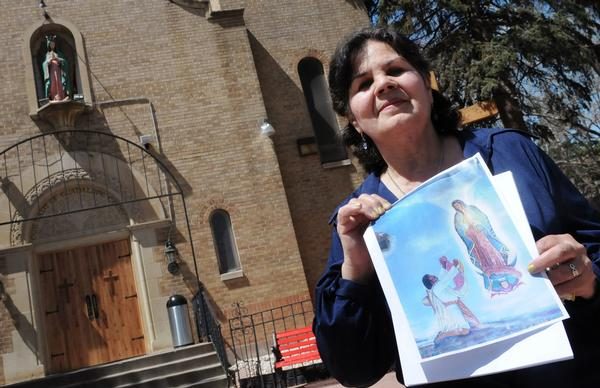 Carlota Espinoza was born in Fraser, Colorado and was the middle child of 14 siblings. She is Chicano muralist who had emerged from the Chicano movement in the 1960s. Carlota Espinoza had attended the University of Colorado at Denver and was involved with the Crusades for Justice. She uses her art to express those in need, especially the Chicano communities in Colorado. She is well known for her mural of La Guadalupe that is found on the altar of Our Lady of Guadalupe Catholic Church in Denver.

Carlota Espinoza standing in Front of Our Lady of Guadalupe, holding a photo of her mural found inside the Church.

Carlota Espinoza paints mural in Our Lady of Guadalupe altar

Carlota went to Father Lara at Our Lady of Guadalupe to ask if she could donate a piece of art to the church. With approval Carlota painted a mural, The Apparition of the Virgin Mary to Juan Diego in Mexico (1977). The mural had been on the altar for 32-33 years until Father Benito Hernandez took over and had the wall blocked because it took away from the central focus of the Holy presence of the altar. Written by: Laura Mercado