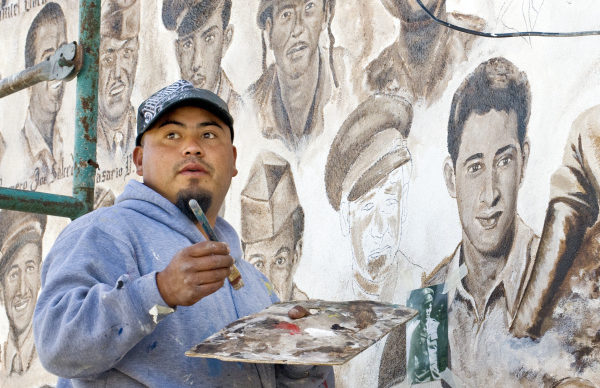 Carlos Aguilar was born in Michoacán, Mexico, and lived with family members in several Mexican states before coming to the United States as a child to be with his mother in Mission Viejo, California. Since he did not speak English during his first year of school in the US, he spent most of his time doodling in his notebook. After graduating from Serra High School in San Juan Capistrano in 2000, he earned a certificate in graphic design at Saddleback Colleges in 2003. In 2010, Aguilar was challenged by his brother to take his artist talents further, who suggested that he should create something for his community. As a result, Aguilar came up with idea of creating a lasting tribute to members of the Logan Barrio community, leading to the creation of the mural Among Heroes, depicting Mexican-American veterans.

Created by artist Carlos Aguilar, the 20 ft. x 34 ft. Among Heroes mural pays homage to the 160 Mexican-American men and women of the Logan Barrio in Santa Ana who served during World War II or Vietnam. To create a lasting tribute to members of the Logan Barrio community, instead of portraying the clichéd image that many held of La Raza, Aguilar wanted to help the local community and general public understand how Mexican-Americans have fought valiantly for the United States, with some sacrificing everything.
As such, the mural is adorned with realistic portraits and depictions of war, recreated from photographs provided by relatives of those painted in the mural. Standing as place of remembrance, the mural recognizes the importance of remembering those who gave their lives to protect of the fundamental ideals that America stands for. Communicating a sense of duty and sacrifice through the faces shown, the mural also shows the commitment of the residents within the Logan Barrio to preserve their identity among the many faces that construct the ideas, images, and memory of Santa Ana. In doing so, the mural stands as place of remembrance.