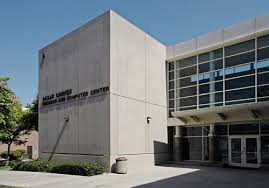 The Cesar Chavez Business and Computer Center is located at Santa Ana College, near the SW corner of W 17th Street and Bristol. In 1994, the Rancho Santiago College Board of Trustees unanimously decided to name the planned building after civil rights activist and labor leader Cesar Chavez (1927-1993), with strong student and community support. Built 1994-1996, the two-story, 53,000-square-foot building cost $12.4 million.

In 1997, on Mexican Independence Day, the building was dedicated to its namesake, and the ceremony included a speech by Chavez’s son Paul F. Chavez, an Aztec blessing, and Mexican folk dancing. An altar with pictures of Chavez, the United Farm Workers flag, and a Mexican flag was placed inside, along with a mural by renowned muralist and local artist Emigdio Vasquez: The Legacy of Cesar Chavez. Currently, the building continues to house various computer and business departments, as well as media and arts departments.

The Legacy of Cesar Chavez

Designed by internationally known artist and muralist, Emigdio Vasquez, The Legacy of Cesar Chavez mural was produced exclusively for Santa Ana College. The mural is a continuation of Vasquez’s many works that depict the urban experience of working class Chicanos. Through this art and others, Vasquez aims to convey a powerful sense of the human struggle for dignity within the Hispanic experience of 20th and 21st century America. Of the many murals he has created, Vasquez considers The Legacy of Cesar Chavez his favorite. "As a tribute to Cesar Chavez, I wanted to paint a heroic and poignant mural that would celebrate his life. I have depicted Cesar Chavez surrounded by some of his compatriots in the farm workers movement, like Dolores Huerta, Luis Valdez, and Fred Ross. Just as important, however, I decided to include anonymous images of people from the working class, the people loved by Cesar Chavez. He adhered to the ideal that working people are not beasts of burden, but are human beings deserving of respect, dignity, and social justice. Cesar Chavez dedicated his life to this ideal, he engaged in a ferocious struggle to improve the lives of the campesinos who toil in the fields. His struggles and accomplishments leave an important legacy that will forever be recorded in the annals of American Labor History. Cesar Chavez will be honored in history by his inclusion in that pantheon of heroes and martyrs of the American working class." -Emigdio Vasquez Sources: 1. Sal Rojas, "Santa Ana College, Orange County. Mural by Emigdio Vasquez," BrownPride.com.